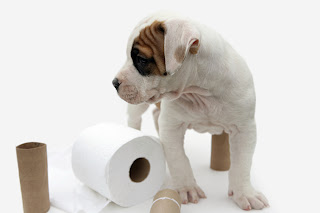 Bringing home a puppy means lots of fun but also lots of mopping up. Housebreaking is usually the first thing on the training list for new puppies and teaching her that your hardwood floors and Oriental carpets are not her personal restroom can be a challenge. A first time owner might think his puppy has a plumbing problem, but usually it’s just a case of her being in the wrong place at the wrong time. Once you teach her the bathroom basics, she’ll quickly get the idea.

Natural Instinct:
Dogs are naturally clean animals, following in the house-proud tradition of their ancestors, the wolves. They’ll not dirty their eating or sleeping area, and their mothers teach them from day one how to be clean – and not just behind the ears.

“If you follow this instinct for cleanliness when your new puppy comes home, your pup can be house-trained within 48 hours,” says Dennis Fetko, Ph.D., an animal behaviorist in San Diego and host of “Animal Talk with Dr. Dog” on KFMB radio in San Diego. This takes some pretty intensive working with your pup, and you might not be able to spend this much time with her. Using the same philosophy but working more slowly, you’ll get the same result.

Starting Right Away:
“If you take a preventive approach with your puppy right from the beginning, you’ll be far more effective in your house-training,” says Scott line, D.V.M., an animal behaviorist at he Golden Valley Humane Society, and staff veterinarian at the University of Minnesota Veterinary teaching hospital in Minneapolis.

When you bring your puppy home at eight weeks, she is ready to learn that there is a time and a place for everything. “It’s the optimum time to establish good bathroom habits,” says Dr. Fetko. Your puppy wants to make you happy and, despite an accident here, there and everywhere, she will try hard to fit in with her new human owners, who already know how to use the lavatory.

The One – Stop Toilet Spot:
It’s easiest for your dog if you assign one particular area as her toilet spot. In most cases, this will be somewhere in your yard. For apartment dwellers this will be paper spread thickly on one area of the floor.

When dogs relieve themselves, they release scent chemicals that are passed with the waste. These are called pheromones, and when dogs smell them later on, they trigger a reflex that makes them want to eliminate again. This is why it’s a good idea to take your puppy to the same place each time. The odor also lets other dogs know that this patch of ground is taken.

Your dog won’t let this idea fade, either. She will keep freshening up her scent by going back to the same spot over and over again to relieve herself. “That is why you’ll want to control the routine as much as possible,” says Dr. Line.
Toilet Routines:
Knowing when your puppy needs to relieve herself is the key to house-training. Puppies ill always need to go first thing in the morning, last thing at night, when they wake up from a nap, when they leave their crate, after finishing a meal or after a playtime. If you establish a routine and keep your eye on her, you’ll know exactly when she wants to go.

So, when you see her lick her lips after polishing off her dinner, it’s time to visit her toilet spot. Take a walk with he to the area you want her always use. If you are own – you’re going to have the share the early morning chill with her to make sure she finishes what she set out to do.

Your pup may not go straight away when you get to the spot. “Once they’re outside, puppies like to investigate and soon forget what they came out to do,” says Janice DeMello, an Obedience trainer in Somis, California. This explains why you can be outside for an hour waiting for your puppy to use the facilities, and the minute you come back in the house she piddles on the kitchen floor.

DeMello suggests hooking your puppy’s three-foot leash to her before going into your yard. “Keep the puppy in one area on the leash and tell, ‘Get busy,’ When she’s bored checking out the spot, she’ll proceed with the task. Then you can take the leash off.”

Crate-Training:
Putting your dog in a crate may seem cruel, but it’s actually one of the kindest things you can do for her. This will be a cozy spot all of her own where she sleeps, rests and gets away from it all. And it is an excellent way to keep tabs on what she’s up to. There’s no worry she’s going to destroy the place when she’s home alone.

Since dogs won’t soil where they sleep, a crate is indispensable for house-training. “Introduce the puppy to the crate gradually,” advises Suzanne Hetts, Ph. D., an applied animal behaviorist in private practice in Littleton, Colorado. Tempt her inside by throwing in a few puppy biscuits, then let her explore. Praise her when she peeks in to retrieve the food but don’t be in a rush to shut the door. Call the puppy out and praise her, then toss another biscuit in and praise her when she goes in and out on her own.

Once your puppy seems confident about going into her crate, try closing the door for a short period. Open the door and compliment her again. When she goes back in, put an assortment of objects – a soft blanket, a brightly colored toy, and some chew bones – into the crate to keep her company. You can even feed her dinner in there but don’t allow whining or barking after she’s done eating. “If it fits, put the puppy’s crate near your bedroom so you can hear her when she wants to go outside at night,” advises Dr. Hetts. And remember that the minute she’s let out of her crate, the two of you have an appointment with the toilet spot.

“In beginning, you don’t want to crate a young puppy for more than three hours at a time,” says Dr. Hetts. “Leaving a ten – week old pup confined all day is totally inappropriate.” And it should never be used as a punishment – your puppy’s crate should be a place where she likes to spend time. Vary the objects you put in her crate so she looks forward to going three. Once your puppy is four months old, she can spend five hours in her crate after she has been exercised.

Paper – Training:
Maybe there’s a blizzard the week after you get your new friend home. Or she’s a small dog who needs to go to the bathroom more often than a larger dog. Or you live in a high-rise building and you know that taking the elevator down 15 floors every time your dog needs to go is simply not feasible. Perhaps it’s just that your schedule won’t allow for such frequent trips outside. You may have to paper – train her.

Paper – training works because it lets your dog know that there is a special place in the house you want her to use as her bathroom when she can’t get outdoors. To teach her where this spot is, spread several layers of the newspapers over a large plastic sheet on top of the floor (don’t put it on top of the carpet). Leave a slightly soiled paper underneath the fresh paper pile so she knows that this is place you want her to go. As the days progress, make the paper area smaller. When the time comes to move her bathroom training outdoors, take along one of her soiled paper for the first day or two. It will take some time for her to feel comfortable in the new environment and having the familiar scent will ease the transition.

Paper – training should be sued only when you can’t go outside with your pup. It should not be the first step in house – training process. “You will be rewarding the dog for eliminating in the house, but you will still have to train her later to go outside,” says Dr. Fetko. Whatever the difficulties, your pup should be introduced to the toilet in the great outdoors at least once in her first week or two at home.

Preventing Accidents:
In the house, keep your puppy in your sight at all times, suggests Dr. Hetts. This way you’ll minimize the number of accidents she has and she won’t have a chance to develop preferences for going in areas that you consider off limits.

If you pick up the mess as soon as she makes it. Your puppy undivided attention. “If you can’t watch her, confine her to a safe area such as the laundry room or her crate,” suggests Dr. Hetts.

You should also be careful not to overfeed your pup – the more she eats and drinks the more chance she has to mess up. Feed her a well – balanced commercial dog food on a regular schedule of three meals a day. Water should be offered of five times a day. This builds a steady appetite and regulates your dog’s digestion. “Avoid leaving the food out all day if you want to house-train your puppy quickly,” says Patrick Connolly, D.V.M., a veterinarian in private practice in Thousand Oaks, California.

Caught in the Act:
If you catch your puppy with a piddle in progress, create a commotion that will startle her. This could be clapping your hands, stomping your foot or shaking some keys. When she stops to listen, pick her up and take her to the right location. As soon as she completes business, praise her lavishly. You should never yell at her, or hit her with your hand or a rolled-up newspaper. This will only teach her not to urinate when you can see her, and she’ll go behind your back instead.

Common Problems and Solutions:
Despite her best intentions, your pup may have relapse and forget what she’s learned. Just patiently repeat the process and it should all come back to her. It’s not always possible to watch your dog carefully, especially when you’re busy during the day. As a result, more accidents occur than would normally, according to Dr. Line. “Just try to not give your puppy opportunities to mess up in the first place,” he says.

For pups who consistently use the wrong spots indoors, such as the bedrooms, stairs on the living room carpet, Dr. Fetko recommends feeding your dog in those locations. Dogs will not soil where they eat.

Another pet in the house, a new baby or a visitor can throw your dog’s bladder control off. This is a sign of insecurity and can be prevented by giving her extra attention during this time.

Another pet in the house, a new baby or a visitor can throw your dog’s bladder control off. This is a sign of insecurity and can be prevented by giving her extra attention during this time.

Some dogs leak a little urine when you bend to pet them. “This isn’t a house – training problem, but over – submissive behavior,” says DeMello. A dog does this to show submissiveness to more dominant dogs or people in her human pack. If your dog is a submissive wetter, don’t punish her as it will just make the problem worse. She needs more confidence. Obedience or agility training will help provide this.