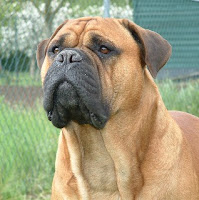 Bullmastiff Breed Information
The Bullmastiff is a breed of large dog. A member of the Working Group, it is large and solidly built, with a short muzzle. The Bullmastiff shares the characteristics of Molosser dogs like it, and was originally developed by 19th-century gamekeepers to guard estates and immobilize poachers. The breed's bloodlines are drawn from the English Mastiff and Old English Bulldog; it was recognized as a purebred dog by the English Kennel Club in 1924. It is an athletic and muscular dog, yet docile and obedient, traits which have made the breed popular as a family pet. The Bullmastiff makes a great companion, and guard dog. Although intimidating at times, this breed can be very affectionate. Loving human attention, this breed is calm, gentle, and even-tempered.

Bullmastiff Health and Diseases:
The lifespan for a Bullmastiff dog is generally from eight to ten years. This dog breed will not stop growing until it is about two and one half years of age. Bullmastiff dogs are prone to certain hereditary dog diseases including: