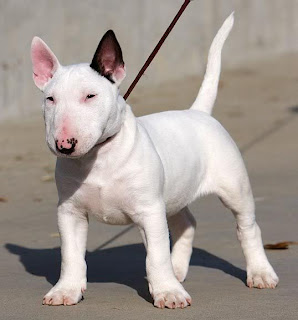 Bull Terrier / English Terrier Breed Information:
The Bull Terrier breed of dogs is also known as the English Terrier it is a cross between the Bulldog and the Old English Terrier with a bit of Spanish Pointer in his bloodline and is considered in the terrier family. This breed was first bred in 1830 to attack bulls in combat sport. They were soon replaced in 1850 with the White Cavalier and have since been used for many different things.They are known for their large, egg-shaped head, small triangular eyes and their "jaunty gait." Their temperament has been described as generally fun-loving, active and clownish. Bull terriers have appeared as characters in many cartoons, books, movies, and advertisements. The Bull Terrier has been used as a guard dog, a ratter, a herder, and a watchdog and does extremely well in all these jobs, it is quite a popular breed all around the world.

Bull terrier Health and Disease:
All bull terrier puppies should be checked for deafness, which occurs in 20% of pure white dogs and 1.3% of colored dogs and is difficult to notice, especially in a relatively young puppy. Many Bull Terriers have a tendency to have skin allergies. Insect bites, such as those from fleas, and sometimes mosquitoes and mites, can produce a generalized allergic response of hives, rash, and itching. The average lifespan of the Bull terrier is around 10–12 years, although the oldest living recorded bull terrier is known to have survived to be 17 years.The Bull Terrier's coat is easy to maintain, but grooming can keep it in near-perfect condition. Adding oils to their meals can also vastly improve the quality of their coat.