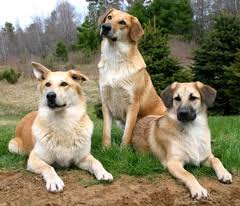 Chinook Dog Breed Information:
The Chinook was developed in 1917 by Arthur Treadwell Walden to be used as sled dog. They had the ability of pulling heavily loaded sleds even for long distances. An immensely diligent breed, they became nearly extinct and at present there are only 500 known Chinook to exist. They are reputed as the “New Hampshire State Dog.”

Chinook Health and Diseases:
Health issues and dog disease in this breed of dogs may include:
The life expectancy of this breed is about 10 to 15 years.