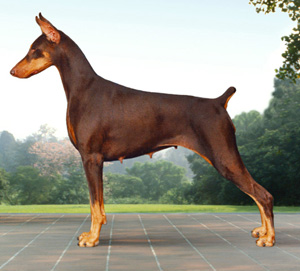 The Doberman of today is a well appreciated breed of dog all over the world,that serves well as the perfect companion and house dog.

Doberman Pinscher Health and Diseases:
The average life span of this breed is between 10-14 years,during their lifetime they are known to suffer from several health disorders.The more serious illnesses which pervail include cervical vertebral instability,dilated cardiomyopathy,prostatic disease and Von Willebrand's disease,(a bleeding condition which is under gentic testing since the last decade,this test is preformed on the breeding pair inorder to prevent further progression of this disease into the future generation).The common and not so serious ones include hip dysplasia and hypothyroidism.