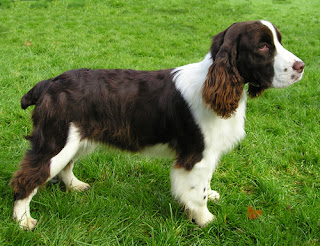 
English Spinger Spaniel Breed Information:
The English Spinger Spaniel traces its ancestry back to 17th century in America, this breed gained its claim to fame, at the time of the Renaissance, proving to be sturdy hunting companions, for the European elite. This particular breed is considered the largest amongst the Spaniels and yet gentle, fun-loving and very friendly with people, especially with children, craving home environment, basically family attention. Though its not a good idea to leave them alone for prolonged periods, they can be rather naughty and destructive. Known for their courage, strength, intelligence as well as their loyalty, they are utilized as sniffer dogs in different countries.

The English Spinger Spaniel today is divided into two groups, firstly the "bench bred"used for conformation ring and secondly "field bred"used for field trials and hunting game. Its also largest amongst the spaniels,  it excels in hunting not only on land but also water as well.Its also related to the Welsh Spinger Spaniel and the English Cocker Spaniel and 100 years back the Spinger and Cocker Spaniel were reproduced from the same litter.Tracing their ancestry back to the Shropshire and Norfolk Spaniels during the middle of the 19th century.Reliable, tough, agile, vibrant and durable this breed has an edge over all other Spaniels due to its unmatched strength. Although, they love human interaction, this breed does not take too well to dogs of the same sex and pet birds.

English Spinger Spaniel Health and Diseases:
In this breed of Spaniel the show-bred dog suffers from a rare personality disorder known as the "rage syndrome", unlike the working-bred dog, it can also trigger on a violent attack, if this occurs, the dog will disobey all commands, this rare disorder has been traced to a form of epilepsy and can be treatable. They can also suffer from epilespy, PFK, PRA and hip dysplasia. The English Spinger Spaniel has the tendency to put on weight, thus should have a healthy diet with regular exercise. They have an average life span of 12-14 years.

They require grooming with a hard brush and bathing or dry shampooing, should be only done when necessary. However, their ears and must be kept clean. The hair on their feet, should also be trimmed, to protect them from burrs or other objects from getting stuck.