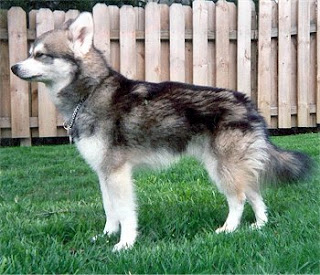 Kai Dog Breed Information:
The Kai Dog Breed emerged in Japan to be used for hunting wild boar and deer and were titled as a “natural monument” is 1934. Kai, a rare dog breed, was not considered to be a family pet but over the years they have proven to be pleasant companions. It is a strong, brawny and medium dog which possesses strength and bravery and move at a rapid speed over the rough and difficult terrains. They can also climb trees and are distinguishable due to their brindled coat because of which they are also known as the “Tora Dog”. They are a double coated breed, the outer coat being medium to long in length, straight and rough whereas the under coat being thick and soft. The hair is shorted on the face, head and legs and longer on the body and the tail. The brindle markings do not become clear until the puppies grow old.

The Kai is a very reliable custodian, being very loving and dedicated. They are wary of strangers but get along with children and dogs that they have been raised with. Even though the Kai dogs remain peaceful, silent and clean indoors, it is recommended that the inexperienced dog owners do not purchase this breed because of its high prey drive.
Moreover they are dominant and in controllable, thus making it difficult for them to be trained unless a strong, just, patient and consistent methods are adopted. It should be kept in mind that the Kai dogs would not respond to harsh methods and they should be trained at a young age. Kai needs to be brushed on a weekly basis and bathing should be done only when necessary along with regular cleaning of ears and trimming of nails.

The Kai breed is not suitable for city or apartment living and should thus be kept in a rural environment where they have enough space to go around roaming, hunting and running.

Kai Dog Health and Diseases:
The Kai dogs are very difficult to obtain and hence there are no known health diseases associated with them.