What are racing Dogs ? 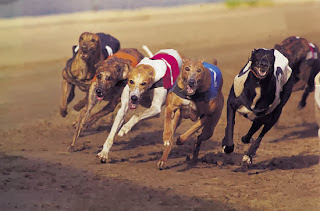 Dog racing exists in several forms, each suited  to the strength, temperament and original  purpose  of the particular  breed.  With  the exception  of sled-dog racing and agility competitions, the principle is to provide a substitute quarry, and for this reason the most commonly  raced breeds are the sight hounds, of which  the Greyhound is the  best known.

Greyhound racing:
The  sport  of Greyhound racing  originated  in  the  United  States  early  this century  and has become popular  throughout the world. It came to Britain  in1926, when a dog called Mistley crossed the line ahead of the others in the very first  race,  at  Belle  Vue,  Manchester.  A  governing   body,  the   National Greyhound Racing Club, was formed, which licenses approved  stadiums  and maintains  a register of the dogs. All dogs raced on recognized tracks must run under  their  registered  name and must  be trained  by a licensed  trainer. These  rules and other  precautions protect the public from malpractice.  On unlicensed  or flapping  tracks, numerous in the Midlands and  the  North of England,  racing is more devious. The  same dog may run at different  tracks under several pseudonyms and may be trained by its owner, limiting the degree of control the stadium  can exercise. The  Greyhound is primarily a betting medium, and it may suit its owner better for it to lose than to win. Many dogs are run below their best form in order to keep 'a bit in hand' - just before the summer  holidays or Christmas, winning  times can improve  dramatically. Races take place on an oval track, and six dogs run at a time. The  distances vary from 300-yard (274m) sprints to goo-yard (823 m) marathons. Since the early days, times have improved greatly, and modern Greyhound stars achieve speeds  of up to 40 mph  (64 km /h).

Whippet racing:
This  form of racing is traditionally associated with the mining communities in England and was widespread  before the Greyhound boom. A straight track was divided into taped lanes, and instead of emerging from traps the whippets were thrown into the race by handlers known as slippers. There was no moving lure, with each dog racing to seize a sack or towel, waved beyond the finishing line by its owner. Today  this style of run ning, called  rag racing, exists only in the Potteries  in the North  of England.

Modern  whippet racing is a thriving  and popular amateur  sport  with little gambling or foul play. Handicapping may be on time or, more commonly,  by weight  when a one yard (1 m) advantage  for every  pound  (t kg) of weight difference is given to the lighter dogs. Scaled-down versions of greyhound traps are used, and the whippets chase a lure of rags wound in on an electric pulley. The distance varies from 140-200 yards (128- 183 m), but whippets are equally at  home on a greyhound  track over 300 yards (274 m). Bitches  are  usually preferred  to dogs of the same weight. Whippet  racing is popular  throughout the  world. In  most countries  it is confined  to pedigree  whippets,  but  in Britain  the traditional, specially  bred racing strain  is more numerous.

Lurcher meetings:
The lurcher, a type of dog rather than a specific breed, is sometimes defined as a gypsy  or  poaching  dog.  Usually  the  result  of  crossing  Greyhounds  with Terriers and  sheepdogs,  lurchers  are  enjoying  a considerable  vogue at  the present, and competitive racing is a feature at most of the lurcher shows which are staged in the summer months. Racing is to a lure, as in Whippet racing, and dogs are set loose by their owners. This results in rather uneven starts, which is proabably no bad thing, as most lurchers have had little or no schooling. up to ten dogs may be run at the same time. Lurchers are by definition supposed  to run within their capabilities to enable them to turn quickly on a hare, and racing is not a valid test. It also tends to make them hard-mouthed and spoil them for their  proper  hunting  work.

Hound trailing:
This  is the only racing based on scent and is confined to the fells of northern England. The highly specialized hounds, ofFoxhound origin, follow the line or drag of an extremely  odorous sack that has been pulled over several miles of moorland. The course, up to 10 miles (16 km) long, is laid out around a valley so that the hounds are in sight of the spectators most of the time. Once the hounds return  to the valley floor and are in view of their owners they are 'ragged' like Whippets to produce a finishing burst.  Betting on trail hounds can be heavy, but race meetings are governed by strict rules laid down by the various associations.

Sled-dog racing:
This is primarily a North American sport although  supporters of the Husky breeds in other parts of the world also practice it. Teams  of Huskies pull lightweight racing sleds (or wheeled buggies in warmer climates) over trails of varying lengths. Races may be as short as 10 miles (16 km) or as long as the 1169 miles (1881 km) Iditarod  race between Anchorage  and  Nome.

For  the  shorter  distances,  the  teams are  largely crossbred  Huskies  with Border  Collie, Setter, Greyhound or Coon Hound  blood to give speed. The true Huskies are at their best in protracted endurance events. Teams  of up to si xteen dogs are driven  by the 'musher' and can achieve an average speed of 20 mph (32 km/h); the record for the Iditarods race is fourteen days, more than So miles (129 km) a day.