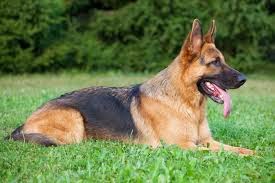 The German shepherd is different to all other breeds. What makes him look and behave so uniquely? Like all purebred dogs, a distinct set of qualities have been bred into him over many generations which differentiate him from every other breed – even those bred to do very similar job.

A German shepherd is one of the world’s most popular breeds. To make sure that he retains his original working ability and the physique to perform the job to the best of his ability, breeders use a breed standard. This is a written description of the ideal German shepherd, detailing coat, conformation, color and character. It is the blueprint for the breed which ensures that all the qualities which make the German shepherd special will be retained.

There are wider implications as regards health and breeding programmes. As with purebreds, inherited conditions to occur, and it is only by following the stipulations of Breed Standard and researching into the bloodlines of all breeding stock that the future health and well-being of the German shepherd can be guaranteed.

THE BREED STANDARD
The following analysis is a summary of the key points of the Breed Standards drawn up by the English and American Club for a copy of the Standard that specifically applies to you.

General Appearance/Characteristics
Alert, well-balanced, powerful and well-muscled, the German shepherd’s working ability should be immediately apparent. This ability is paramount and the dog’s look should never take precedence. The individual should give a clear impression of masculinity or femininity.

Temperament
A German shepherd’s temperament is his most important quality. He should be courageous, confident and biddable, and never aggressive, nervous or shy.

Head and Skull
The head should be in proportion with the body. The forehead should have slight curve, and should blend into the long, strong muzzle effortlessly.

Eyes
The medium-sized, almond-shaped eyes should not protrude, and should be as dark as possible, complementing the dark, rich coat. He should have an intelligent expression.

Ears
The German Shepherd’s fairly pointed ears should be erect and face forward, so even the faintest sounds will be picked up (such as lost sheep, or a predator’s approach). The centre lines of the ears should, ideally, be parallel to each other.

Mouth
The muzzle top line should be parallel to that of the skull. The jaws should be strong (originally, he would nip sheep in order to herd them into the desired direction) and the strong, healthy teeth should be arranged in a scissor-bite, formation (the upper teeth closely overlapping the lower teeth). Without a scissor-bite, the will not be able to close its mouth properly, and so loses considerable strength and power, and may not be able to defend its wards from predators quite so ardently.

Neck
The neck should be muscular and fairly long (though still in proportion to the size of the head).

Forequarters
Forequarters are strong and well-muscled. Long shoulder-blades laid flat on the body at an approximate right angle. Forelegs are straight, and the pasterns are slightly angulated.

Body
The German shepherd should be slightly longer than he is tall. He should have a deep chest with plenty of room for heart and lungs. The ribs should neither be flat nor barrel-shaped. The withers are high and join the top line, which slightly slopes from the top end of the dog to the bottom. The back should be straight.

Hindquarters
Strong, broad and well-muscled, to propel the body forward with the least effort. The short, straight, powerful hocks ensure the German shepherd can turn quickly, an important skill when herding.

Feet
The arched foot is a cross between a cat foot and hare foot. This is so that, in soft ground, the foot will spread out, and, together with the webbed feet, this ensures the dog has a wider surface area so that he doesn’t sink in mud etc. the pads should be hard-wearing to protect against all kind of terrain. The nails should be short and dark.

Tail
The bushy German shepherd tail should hang slightly curved, like a saber, and, ideally, should not be carried above the level of back.

Gait/Movement
This is very important aspect of the German Shepherd Dog. As a Shepherd, he had to be able to cover a lot of ground, and so energy-efficient movement was vital. Because he is trotting dog, he needs a long stride to cover the most ground with the least number of steps. Each foreleg moves simultaneously with the diagonally opposite hind leg. The hindquarters really thrust the body forward. The backline should remain fairly level.

Coat
The German shepherd has a waterproof double coat maintain warmth when out shepherding in hostile conditions. The outer coat should be straight, close-lying and as dense as possible. Hair on the head (and inner ear), and in the front of the legs and paws in shorter, while longer hair can be found on the neck and on the back of the legs.

Color
The German shepherd varies in color. In the US, most rich colors are permissible. In the UK, the following colors are acceptable: black; black saddle with tan or gold to light grey marking; all black; and all grey with lighter or brown markings (‘sables’). Both countries frown on pale colors, such as white, blue, liver, and albino.

Although white pet German Shepherds are very attractive and popular, the Breed Standard discourages the pale colors in pedigree dogs.

This is because the Breed Standard aims to preserve the original working dog. Light colors are undesirable in a Shepherd dog, as he would be difficult to spot in a snowy landscape. The German shepherd would also need to be dark to remain inconspicuous at night when watching his wards.

UNDERSTANDING PEDIGREES
There are three different ways of achieving the ideal German Shepherd as laid out in the Breed Standard:
•    In-breeding
•    Line-breeding
•    Out-crossing.
Each of the above relates to how closely the stud dog and the brood bitch are related. All three can produce sound, typical dogs, as long as the dog in the pedigree are good, healthy examples of the breed with excellent temperaments.