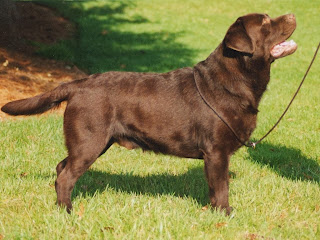 As the day of birth approaches, introduce the expectant mother to her whelping box and arrange for your vet to be on call in case of problems. Although Labradors seldom have difficulties, it is best to have experienced help both at the delivery and alter, for after – care of weak puppies.

Introducing a Whelping Box:
Several weeks before she is due to deliver; familiarize the mother – to – be with her whelping box. The box should have a length and width of at least 1.2 cm (4 ft), and be made of marine ply, which will not be damaged by birth fluids. Three sides should be 45 – 50 cm (18-20 in) high to prevent the puppies from wandering off, while the fourth should have a lockable opening to allow the mother easy access. Start collecting newspaper; you will need several bundles to line the box and to serve as bedding for the new puppies for the next two months.

Signs of Impending Birth:
You bitch is likely to refuse food shortly before she goes into labour. She will restlessly seek out her whelping box and start to tear up the bedding, preparing a nest for her puppies. Her body temperature will drop, and she may pant. When her waters break and contractions begin, birth is imminent, keep other animals and strangers away during the labour.

Delivery Case:
If you have never been present at a birth, ask an experienced dog breeder to attend, and inform your vet when labour begins. Keep the room temperature at around 25 degree C (77 degree F). If after two hours your bitch does not produce a puppy, contact your vet once again for advice. The puppy’s position may need manipulating to facilitate delivery. Although uncommon, some Labradors do require a Caesarean section. Place a warm, towel – covered hot – water bottle in a cardboard box, and keep this nearby as a safe receptacle for each newly – delivered puppy. The box may also be used to transport the puppies if mother and litter need to be taken to the vet.

The new Litter:
Towel – dry each puppy after it is delivered, and clear its nose of mucus; all newborns should squeal and wriggle. During whelping, offer the mother drinks of warm milk. Let her rest after labour has ended and all placentas have been delivered. Place each puppy by a teat to suckle. The mother will also require plenty of nourishment in the coming weeks – at peak lactation, up to four times her normal intake.

Assisting a Weak or Abandoned Puppy:
Helping to Suckle:
On average, one out of seven puppies is born relatively small and weak. Runts are often the least healthy of the litter, and if left to nature frequently die within a few days. To aid survival, place a frail puppy near the teats offering the best supply of milk.

Bottle Feeding:
In large, healthy litters where there simply is not enough milk to feel all the puppies, or when the mother is incapacitated or abandons her offspring; use canine milk formula as a supplement. Bottle feed initially every two or three hours, seeking your vet’s guidance on the correct quantities.

Growing Together:
After three weeks, the puppies begin to explore; by 12 weeks, their sense are fully developed. Handle and groom all puppies often, so they learn to accept touched by humans, but do not upset the protective mother. Gentle exposure to new sights and sounds now will help the puppies to grow into well adjusted, adaptable adults.