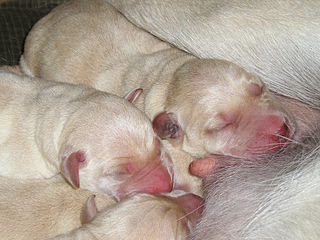 Producing a litter of Labrador retriever puppies is in itself easy, since both male and female Labradors are naturally good breeders. However, the decision to mate your dog must be made responsibly – following sound professional guidance, and always with the best interest of the breed at heart.

The Mating Instinct:
Healthy males as young as 10 months can be used for mating. It is best to wait until a female is about two years old, in roughly her third oestrous cycle, when she is emotionally prepared for a litter. Ovulation usually occurs 10 – 12 days after the first sign of bleeding and vulvar swelling. The most successful Matings generally take place on the male’s home turf.

Pregnancy Diagnosis:
Ovulation, the optimum time to mate, is accurately indicated by an increased level of the hormone progesterone in the blood. Pregnancy, however, cannot be confirmed by blood or urine tests. An ultrasound scan at three weeks or a physical examination slightly later remains the best means of diagnosis.

Dealing with Mismating:
Mismatings can be avoided by keeping a watchful eye on your bitch when in season, by using tablets or injections to prevent ovulation, or by spaying. If an unwanted mating does occur, contact your vet. A pregnancy can be terminated, usually within three days of mating, with a hormone injection. This will induce an immediate repeat season, demanding renewed vigilance for 8 – 15 days after the beginning of vaginal discharge.

Special Needs of an Expectant Bitch:
During the first month of pregnancy, a bitch should continue to exercise freely. Thereafter, the increasing weight of the litter will naturally make her slower and less agile. At this stage, swimming is good exercise, but avoid very cold water. After the sixth week, food intake should be gradually increased so that by the time her puppies are due, a bitch will be consuming 30 per cent more than her normal daily quantity. Ensure that the diet provides an adequate but not excessive amount of calcium.

Male and Female Reproductive Systems:
A bitch comes into season twice yearly, is fertile for three days during each cycle, and will be receptive to mating only during these periods. Males, however, willingly mate year round. For the female, ovulation continues throughout life and there is no menopause, although breeding in later years is risky. Pregnancy lasts for about 63 years.

Responsible Breeding:
If planning to breed from your Labrador, seek professional advice from your vet or from an experienced and reputable breeder. Ensure that the prospective parents’ physical and emotional attributes will enhance the breed. Both partners should be screened for certain inherited diseases such as progressive retinal atrophy and hip dysplasia, via an eye examination and a hip X-ray. Your vet may also advise testing for brucellosis, a canine venereal disease. Remember that Labrador litters are large, usually about eight puppies, and that you will be responsible for finding each offspring a safe home.

Preventing Pregnancy:
Neutering is the most effective and safest means of preventing pregnancy. The female, because she carries the young, is the usual candidate. Both the ovaries and the uterus are removed, followed by a week’s rest. The procedure for males involves simple surgery on the scrotum for removal of the testicles.