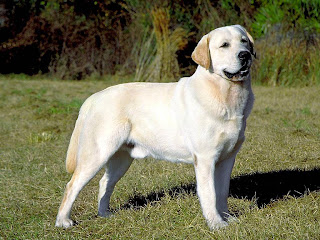 Apart from their obvious physical differences, male and female Labradors can also vary somewhat in character. Specific “types” bred primarily for working or showing may differ too. Yet all have in common the willing nature and eminent trainability that distinguish this justly popular breed.

Physique and Temperament: The Sexes Compared
Male Labradors are typically large and more powerfully built than females, and have less delicate features. In behavior, gender-related differences are very minor, with males only slightly more dominant. Overall, both sexes are very even-tempered and highly trainable.

Gentle, Responsive Female:
Female Labradors are often considered marginally easier to train than males, and less likely to disobey their owners. They also tend to be more playful with other dogs. Neutering usually has little effect on a bitch’s personality, but can sometimes reduce an inclination towards possessiveness.

Confident Male:
Males tend to have a more willful nature than females, and therefore can be slightly more headstrong and disobedient. However, unlike numerous other breeds, male Labradors are not markedly more aggressive than females. Although they may be instinctively assertive with other male dogs, dominance is more likely to take the form of rowdiness rather than belligerence.

Gender-Specific Medical Problems:
A variety of diseases are caused or influenced by sex hormones. Unless spayed early in life, females of all breeds may suffer from breast cancer and pyometra, or womb infection. Uncastrated males sometimes develop perianal tumours, testicular cancer, or prostate disorders, with associated pain or bleeding on urination. Neutering is part of the preferred treatment for all gender-related medical conditions, but in Labradors particularly, neutering must be followed by careful diet control to prevent weight gain.

Perfect Looks:
Many Labradors are bred primarily to conform to formal show standards. The notion of an ideal specimen continues to vary somewhat over time and from country to country, since the official breed standard may be interpreted fluidly. For many years, Labradors in the USA were bred to be considerably large than the favored European size. Now these preferences have been more clearly defined in a new American standard. Whichever standard is used, dogs intended for exhibition trained from an early age in show-ring deportment.

Bred to Work:
Although all Labradors can be trained as gundogs or for working trials, requiring skills in obedience, agility, or scent trailing, some are bred specifically for such roles. They may still meet show standards, but often have lighter leaner bodies which are considered more agile in the field. Working dogs are also bred to have an exceptionally strong retrieving instinct and a keen responsiveness to training.

Selective Breeding for Special Roles:
Labradors and Golden Retrievers are the world’s most successful assistance dogs, trained to help people with disabilities. Just dogs destined for other roles are selectively bred to enhance certain desirable qualities, in recent years dogs have been bred specifically for assistance work, with the most important criteria being sound health and a calm, unflappable disposition.