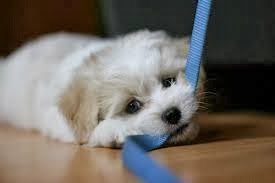 Puppies learn by repetition and consistency, so the first step in establishing good habits is to set up a schedule you and he can live with dogs. Dogs are creatures of habit. Stick to a routine right from the start to help your pup make sense of his new home and understand what you want from him.

A Regular Routine:
“Your puppy should be fed, watered, exercised and taken outside to eliminate at pretty much the same times every day,” advises Dave Wedum, a professional dog trainer and owner of Grizzly dog obedience school and training Kennels in Choteau, Montana. “Besides being healthier for your puppy, feeding at regular times and using a crate makes house – breaking easier.”

Ideally, when a pup is between seven and ten weeks old, his toiled needs should be tended to about every three hours from the time he wakes up until the time you put him to bed. He’ll need to eliminate first thing in the morning, right after breakfast, mid-morning, and right after lunch, mid-afternoon, and right after dinner and again before bed. Remember that exercise and play – time also act as “on” switches for puppy plumbing. “But don’t worry,” says Wedum. “Every three hours isn’t a life sentence. As your puppy gets older, his holding capacity will increase and he’ll need fewer trips outdoors.”

Entertaining Training:
“Start training your puppy as soon as you get him,” advises Wedum. He’ll love the attention and you can start with simple things such as “Sit” and “Come.” Just keep the training sessions short (like puppy attention spans) and always be playful and upbeat. Never train your puppy when you are feeling grouchy. Young puppies are learning how to learn, so your earliest lessons together will color his life-long attitude toward training.

The Basic Commands:
Bribery works wonders when teaching your puppy. When you want him to sit, hold a treat in front of his nose, say “Sit,” and move the treat upward and back over his head. When his eyes follow the goodie upward, his head will tilt back and his rear will lower to the floor. Give the treat immediately, while he’s still sitting, and praise him.

“Come” is a command that can be lots of fun, but it could also save your dog’s life. At feeding time, say his name, then the word “Come” in a happy voice. Show him his dish, and then walk a few steps holding it. Praise him when he follows, and let him eat. Do this every time you feed him and he’ll get the general idea.

Chasing games are another good learning opportunity. Touch your puppy playfully; say his name followed by the word “Come,” and run away a few steps while clapping, bending down and talking happily. Let him catch you. Play with him for a few seconds, then give him another playful tap and run away as before. Three times is enough. Call him only when you know he’ll want to come – not when he is sleepy or busy with food or a toy. And never sabotage your training by calling him over, then giving him a pill or chastising him. Make sure you go to him for the upsetting stuff.

Teaching Him What Not to Chew:
Puppies love to chew – in face, they have to chew – but they can’t always distinguish chew toys from chew taboos. If he can walk on a leash, there’s a great game he can play while learning what’s okay to chew and what’s not, according to Ammen. Decide on a command that means “Get that out of your mouth.” (Most people opt for “Out” or “Drop it.”) Then place some personal objects, such as a wallet or slippers, and some paper items, like napkins or a roll of toilet tissue, on the living room floor, along with your puppy’s chew toys. Put your pup on his leash and let him explore the clutter. When he picks up a taboo item, give your “Drop it” command and jerk the leash. Then quickly move toward a toy and encourage him to play with it.

If you play this game two or three times a day your puppy will soon proudly lead you to the correct object. When he does, be sure to praise him and let him keep the toy. “Now that your puppy knows a command for releasing an object, be sure to use only that command on every occasion, whether he is holding a shoe, a finger, or a dead rabbit,” say Ammen.

And if he holds tight to a taboo object even after you tell him to drop it and jerk the leash? Spray your finger with a drop of bitter apple recommends Ammen. Then slide your finger along his gumline as you give your “Drop it” command. He’ll soon learn to let go.

No More Nipping:
Puppies use their mouths to check things out and to play, much as humans use their hands. But needle-sharp teeth hurt, so puppies have to be taught that nipping is out. “Lack of exercise is a frequent cause of nipping,” says Marilyn Bain, breeder-handler of English Springer Spaniels and owner of legacy Kennels in Kalispell, Montana.

“Your puppy may be so energetic that he has trouble controlling himself.”

If your puppy nips, try taking him on longer or more frequent walks and keep him on a leash in the house when you are home. As soon as he mouths you, make a high-pitched “Ouch” and jerk the leash. Then encourage him to play with one of his toys. If that doesn’t make a difference in a few days, Bain recommends choosing a command that means “Don’t bite” and saying it every time your puppy touches you with his teeth, while pressing firmly on his nose or gently pinching his upper lip. If that doesn’t work, spray bitter apple on the part of you that he mouths. He’ll think twice before taste-testing it again.

If your pup is one of the herding breeds and there are no sheep and cattle handy, he may try herding people, especially children, by nipping at their heels. Teach your children and their friends to stand still and say “No!” if he takes them for sheep. Running only makes matters worse.

A Training School for Pups:
Puppy classes, often called kindergarten puppy training, can be found in most metropolitan areas. You can take him to puppy school for help with housebreaking, crate-training, selecting toys and preventing destructive behaviors.

Other things you might learn about include teaching your pup to accept grooming in a car, walk on a leash and obey simple commands. Going to class is great fun and provides super socialization for your pup. He will be handled by other owners and will learn to get along with other dogs, accept restraint, and pay attention to you in spite of distractions. Eight weeks is the ideal age to enroll him, says Ammen.