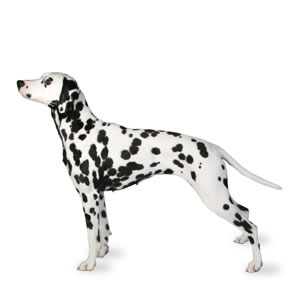 Dalmatian Breed Information:
The Dalmatian Breed is a well loved house pet, famously known as the "Firehouse Dog" gaining its claim to fame after the Disney movie 101 Dalmatians.The Croatian Dalmatinac an ancient breed of dog with its first origins traced back to Dalmatia a historical region on the eastern coast of the Adriatic sea, off Croatia.Their guard dog abilities,strength and size thrust them into the limelight during WW1 and WW2 mainly used to guard the US army camps.In the olden days much liked by the upper crust the Dalmatian was mainly used as a carriage dog.Known for their unmatched black and brown spots this breed its often entered into competitions of high standard kennel clubs by their enthusiastic owners.


Dalmatian Health and Diseases:
Old age and health issues common and unavoidable to all breeds including Dalmatians, have their drawbacks, this breed of dog is prone to a particular type of health issues,which include hip dysplasia effecting about 4 percent of purebreds,however, aging can bring about other conditions such as arthritis and autoimmune thyroiditis which effects 10 percent of dogs in this breed.Statistics show Dalmatians live on to their early to mid teens, however, some have lived on to their late teens.These health issues effects both the sexes.