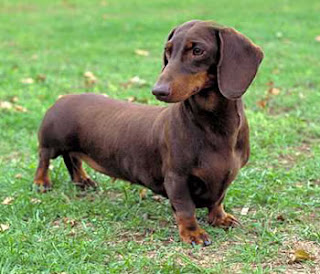 Dachshund Breed Information:
The Dachshund traces its ancestors to Germany centuries ago being bred to chase and hunt Badger,and other burrow dwelling animals with their shortened legs and elongated bodies which enable them to enter the burrows of their prey and force it to leave its burrow.Its also known to hunt the fox and otters.The Dachshund derives its name from the German word "Dachs" which means Bader.They also belong to the family of hounds.A miniature breed was developed to hunt the hare and stoat.

Its common knowledge that breeders are working hard to eradicate these genetic traits within the Dachshund, thus saving them from the repeated occurrence and severity of these inherited medical conditions.