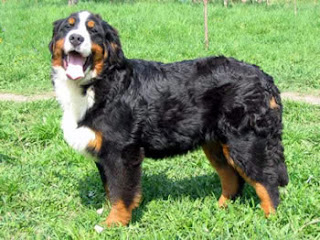 Greater Swiss Mountain Dog Breed Information:
The Greater Swiss Mountain Dog is also referred to as Grosser Schweizer Sennenhund or Bouvier Suisse. This dog originated in the Swiss Alps in Switzerland and was kept by dairymen and herders who were known as Senn or Senner, thus this is the origin of the name. This breed of dogs is a cross of indigenous dogs and large-Mastiff type dogs brought in the area by foreigners. At one time during the 19th century, it is believed that the breed became extinct but was revived in the early 1900s. This Greater Swiss Mountain Dog is protective, devoted and loving. This breed of dogs makes an outstanding guard dog and is strong enough to perform the duties in the farm of the mountainous regions.

Greater Swiss Mountain Dog Health and Diseases:
The Greater Swiss Mountain Dogs have a shorter lifespan as compared to medium- and small-sized dogs; however the life expectancy may vary in different countries. The average lifespan of this breed is 9 to 11 years. It is a normally a  healthy breed  of dogs and has very few problems compared to the other breeds their own size and these health problems and dog disease include:
Detailed Breed Characteristics and Appearance:
The largest of the Swiss dogs