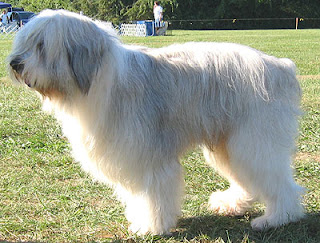 Polish Lowland Sheepdog Breed Information:
The Polish Lowland sheepdog was developed in the 13th century this breed is  also known as POLISH OWCZAREK NIZINNY. Typically this dog was used to guard the sheep and cattle in its initial days.This dog breed is strong ,energetic and is medium in size, they are very clever and alert, they are known as a good watchdog for their watchdog skills.

This breed of dogs is not good for the first time dog owner, they are aggressive and are not recommended for homes with small animals because they are working dog they do not like to be in home, boredom and loneliness makes them destructive. Polish Lowland Sheepdog do well with children whom they are accustomed to, they are good protector and alert their family of any unfamiliar voice and strangers.

They generally have two coats the outer and the inner coat, the outer coat is thick long and straight the long hair cover the entire body including head and eyes whereas the inner coat is soft and dense. They need to be socialized early and train should be given in their early age. They love to solve their problems by their own.  training must be given with firmness and patience they do not react with harsh and rude methods of training.

They are not  good for apartment living. The Polish Sheepdog needs lots of exercise to remain fit and happy. They need big fenced yard to play. This breed of dogs likes hiking and running independently.The sheepdog need regular brushing to remove dead hair from their coat, bathing should be done when needed.

Polish Lowland Sheepdog Health and Diseases:
This is a healthy breed with no known health issues and dog diseases specific to this breed. They do best in cooler climates. The average lifespan of this dog breed is between 12-15 years.

Polish Lowland Sheepdog Characteristics and Appearance:
Polish herding dog which looks rather like a bear cub.

Tail: docked of not born with a stump.

Coat: long and dense. Falls from the forehead over the eyes. Straight but may be slightly wavy.

Origin of breed: descended from an original type of sheepdog.

Characteristics and Uses: intelligent, teachable, lively does not roam, devoted to its own family but wary of strangers. Excellent at guarding herds and home. Suitable for places where it is not possible to keep a large dog. Not particularly exacting and apart from daily grooming needs no special care.