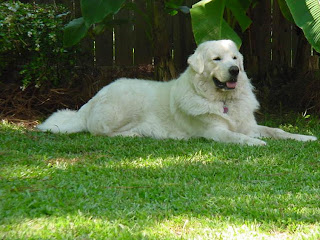 Polish Tatra Sheepdog Breed Information:
The polish tatra sheepdog was developed in the 16th century in poland. This dog breed is used as a guardian and watchdog. During the era of world war II the tatra sheepdog became very rare but with the efforts of polish kennel club this breed was redeveloped, and sprung back to life.

They are capable of bearing cold temperatures, water and climate effects because of their protective coat. this breed of dog is very intelligent fast and full of life they are very loyal to their masters and family,they are very good with well behave children  and other pets but because of their aggressive nature they can attack on any thing which moves. Because of their guarging ability they are very alert and can inform to their family if they hear any sound, voice or any stranger.

The polish tatra sheepdog has two coats: the outer coat is straight and smooth where as the under coat is dense and profuse. This dog breed sheds their under coat twice a year. The tatra sheepdog needs an early socialization and training with a smart and active trainer. Training should be given with patience and fairness, This breed will not respond to any harsh and heavy methods of training.

They require regular exercise and love to do be busy. They love to be with family and play with them, and are not suggested for small apartments, because of their active nature.They need regular brushing to avoid the dead and loose hair. Bathing can be done when mandatory they need special attention towards ear and their teeth.

Polish Tatra Sheepdog Health and Diseases:
This dog breed like all other breeds is prone to some diseases specific to the breed these include hip dysplasia, juvenile cataracts, bloat, epilepsy, and patella luxation. The average lifespan of this dog breed is 10-12 years.

Polish breed of herding dog similar to the Hungarian Kuvasz and the Slovakian Chuvach.

Tail: set not too high, carried below the level of the back, profusely coated.

Coat: on neck and body, thick, straight or slightly wavy. On head and muzzle short.