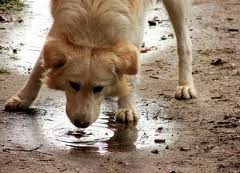 Leptospirosis is an infectious dog disease cause by a bacterium called a spirochete. This dog disease has many other names, some of which include ‘Weil’s disease’, ‘Weil’s syndrome’, ‘Canefield fever’, ‘nanukayami fever’, ‘7-day fever’, ‘Rat Cathcher’s Yellows’, etc. This dog disease affects a wide range of mammals, birds, reptiles and amphibians. Leptospirosis affects animals worldwide; however it is more widespread in the tropics.

Causes
Leptospirosis is a disease caused by a bacterium called ‘Leptospira spp.’ this dog disease may be transmitted in a number of ways which include:


A few dogs, mostly puppies may die even before showing most of these symptoms.

Most common method used while treating the dog suffering from this dog disease is to use antibiotics such as pencillin, doxycycline, amoxicillin etc. However, if the disease is diagnosed at a later stage then dogs may have to be detoxified. Moreover, they need to undergo treatments in order to normalize the hydro-electrolytic balance. For this purpose the vet may give the dog solutions containing salt and glucose and in sever cases dialysis is used. Organ specific treatment are essential in cases of heart, liver or renal damage. It is very important to prevent further transmission of disease by adopting preventive measures.