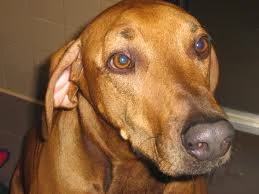 Coccidioidomycosis is a fungal disease which is caused by ‘Coccidioides immitis’. This disease is also commonly known as Valley fever. It also has many other names which include California desert and Desert rheumatism. This fungus may cause respiratory disease in dogs, cats and people. The mild form may be easily treated, however severe respiratory diseases may prove to be life threatening.

Causes:
This dog disease is caused as a result of inhalation of the fungus. Once the dog inhales the fungus, it may be infected within 1 to 3 weeks. The fungus Coccidioides immitis grows in the soil and after rainfall, crop harvest or land construction it forms spores which are released and spread by wind and storms. The dogs when roaming outside may inhale these spores and become prone to the above mentioned dog disease.

The infection may spread to other parts of the body which includes skin, liver, kidney, joints, eye, cardiovascular system, central nervous system, long bones and testes. This disease in extreme cases may result in seizures and heart failures.

Treatment:
Clinical signs which include coughing, pain etc should be treated and activity should be restricted until these signs begin to disappear. If any organ is severely damaged then surgical removal may be needed. In severe cases anti-fungal therapy may be necessary for at least a year. The common anti-fungal agents used are fluconazole, Itraconazole or ketoconazole. Treatment in mild cases is usually successful and may even resolve on their own without treatment. However, in severe cases the disease may still be curable but the outcome of the disease is more guarded.